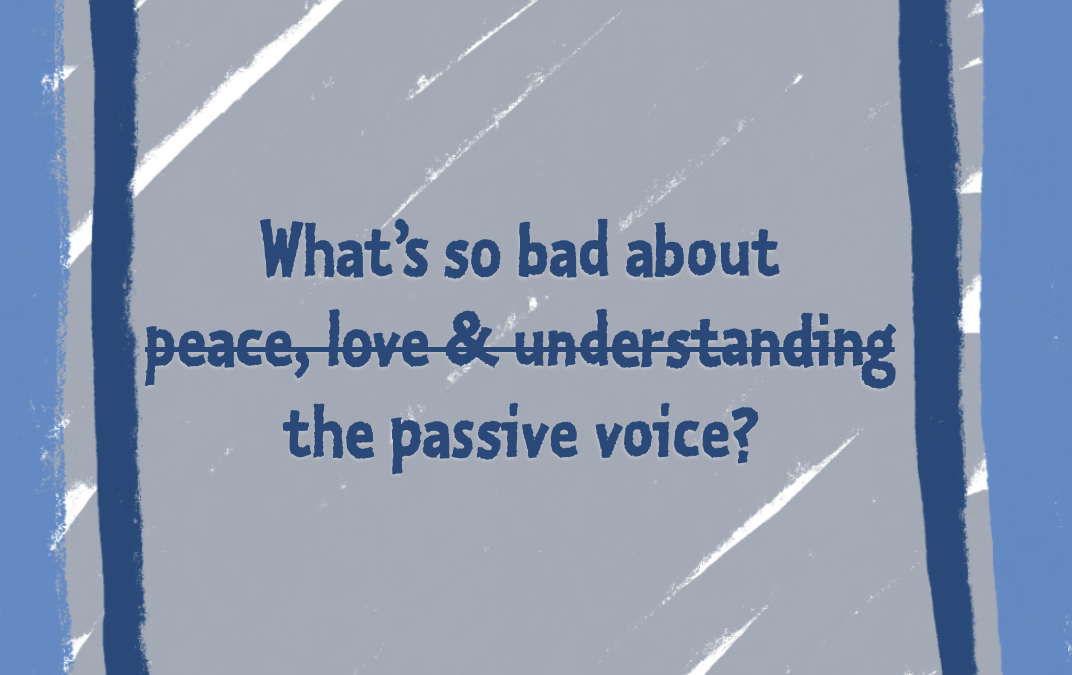 A few weeks ago, my colleague Pete and I did a team writing training for one of our long-time clients. Someone asked about the passive voice, which has always kind-of flummoxed me. Luckily, Pete swooped in to save the day with an explanation I liked so much I asked him to write a blog about it.

I  Shot the Sheriff

(But I Did Not Use the Passive Voice)

How do you identify passive voice?

Simple: Find the verb in your sentence.

If your sentence tells you who or what performed the action in the verb, it’s the active voice. If the sentence doesn’t tell you that, it’s the passive voice.

For example, let's use Bob Marley's famous line, “I shot the sheriff”. The verb is “shot.”

You can see right away there are two reasons the active voice is usually better.

First, it gives us more information: it tells us who shot the sheriff. The passive voice leaves that unclear. Was it Bob Marley? Eric Clapton? Someone else?

Second, sentences with the active voice just tend to sound better. The grammatical form of subject  >  verb  >  object, as in I  >  shot  >  sheriff, grabs your attention. I know it’s a cop-out to say “it just sounds better” but hey – I didn’t invent the English language. I just work here.

I’ve translated some famous lines from the active voice into the passive voice. Can you recognize them?

They just don’t work, do they? How about song lyrics:

The active voice is just better, isn’t it?

Discover the elements of voice.

Reasons to use passive voice

Okay, there are times when the passive voice works better.

Sometimes you don’t want to say who performed the action, like when a politician states, “Mistakes were made”.

Sometimes the person or thing doing the action belongs at the end of the phrase for emphasis, such as, “The Mustang** is made by Ford; the Corvette is made by General Motors.”

But most of the time, we only use the passive voice because it snuck in when we weren’t paying attention.

Take a look at the next thing you write and change any passive voice to the active voice. You -- and your audience -- will be glad you did.

Bob Marley cover art from the 1974 German release. The copyright is believed to belong to the label, Island Records, or the graphic artist(s).

*That last line references one written by the one and only Sir Mix-a-Lot, aka Anthony Ray. I was lucky enough to be in sixth grade with Anthony, and I cannot lie.

**Margot wants you to know she drove that Word Factory green 2012 V8 Mustang at the Ford Proving Ground.