Career advice: Too successful for your own good 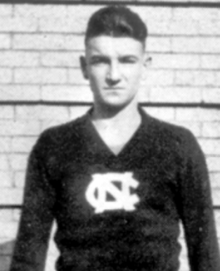 This is my great-uncle, Cartwright Carmichael, who played on Carolina's 1924 National Championship basketball team and was the first All-American in UNC history.

This time of year, I've got college hoops on the brain. You'll hear me humming It's the Most Wonderful Time of the Year not because I'm nostalgic for Christmas, but because tournament season is upon us.

But it's not all fun and games. There are lots of lessons from the court that apply to our business lives. Everywhere you look, there are elite teams getting upset or losing games they seemingly had in the bag. (It's not charitable, but this one made me happy) Often, these squads are victims of their own success. Having reached a high level of achievement, they think that's enough. It's easy for them to feel they don't need to continue to try harder to be better because they're already the best. And then they "stink out the joint", as Daddy Bill, my grandfather (himself a college hoops player), used to say.

Maybe Jay Bilas, the basketball analyst, put it best last night during the Carolina-Maryland game. He suggested that it's great to get way out ahead, but you still have to keep competing. You won't be able to stop the competition every time, so you have to remember to run smart plays on both ends. You have to continue to score your own points to protect the lead you have.

That's an important lesson for successful people and organizations. You may be winning the war for customers, revenues, whatever today, but if you want to keep winning, you gotta stay in the game. Otherwise, your competition will sneak up on you, gaining valuable ground while you're basking in the glow of your own ego (or hubris). Even if they don't beat you, they'll have done some damage. So why risk it?

Keep your head in the game. Play to win. No matter how far ahead you are.

Read our most popular posts so far this year.