When I was a kid, I watched a lot of Tom & Jerry. One of my all-time favorites was Mice Follies, an episode that takes place in the kitchen. There's a frozen landscape thanks to an opened icebox and running faucet, and the usual cat and mice shenanigans. The colors were saturated and the environment was magical. 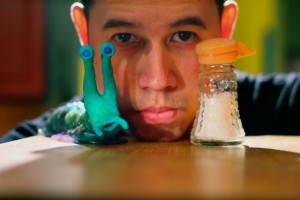 So imagine my delight when I screened Wiggle Room for inclusion in the 2011 Carrboro Film Festival. The stop-motion short had all the cinematic elements of my beloved Tom & Jerry installment. It also had an unlikely hero, a slug. It's got a great original score, too. The film's just beautiful, and the story is sweet, though it does have a sad ending (yes, I cried). No wonder it's getting buzz at other film festivals!

I'm thrilled that I got to interview the filmmaker for my Caught on Film series in the Carrboro Citizen: Caught on Film: Writer-Director Joe Schenkenberg