How not to make a sales call

One more from the annals of "Don't be this gal": 3 mistakes to avoid when making sales calls.

Yesterday I got two hang-ups from the same number (bravo, caller ID). I decided that if the person called back I'd answer differently. And if they still hung up, I'd *69 to figure out what was going on. The person called back and I picked up with "Please don't hang up this time. Who are you trying to reach?" 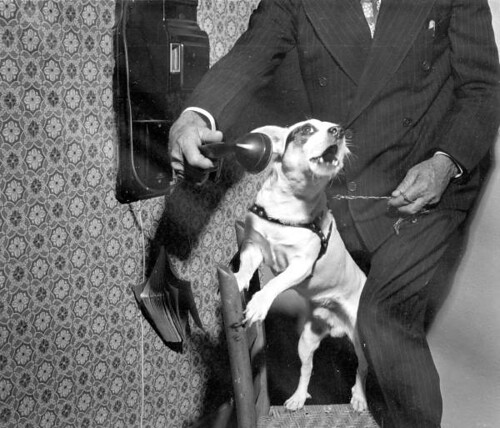 This dog would have had better luck with me on the phone yesterday. (from the Flickr Commons)

Turns out she was looking for a colleague, but instead of saying that the first two times, she hung up when she heard my name. Of course, who she really needed to talk to me, the decision-maker, but her hang-ups had me royally annoyed. She dug herself in a hole before she even pitched.

Your take-away: If you think you have a wrong number, don't hang up. That's just rude even if you're not making a sales call. Ask for the person you're trying to reach, just in case you do have the right number.

She further ruined her chances by grilling me on who I was, what my job duties were and who did I report to. It seemed unfathomable to her that anyone but my colleague could make a decision to buy an ad or other paid promotional opportunity. She sounded annoyed that she would have to talk to me and made it clear it seemed unlikely to her that I was, in fact, "the decider".

Your take-away: How do you feel when people interrogate you? Or question your authority? Right. So why make potential customers feel that way? Just don't.

A key skill for sales people is handling objections. But every time I explained why we weren't interested, her riposte was "Have you seen the media kit?". Not only was that just plain annoying, but it proved she wasn't actually listening to why I was objecting, much less looking for a way to overcome that. Again, her tone was insulting, as though I were too stupid to see the benefits of advertising with her publication.

Your take-away: Listen and offer solutions. When you encounter an objection, a winning response isn't "See the media kit". Instead, listen to what they're saying and respond to those -- and, if you think there's another agenda, address that, too.

I'd like to think none of this is rocket science. But it certainly isn't common knowledge, even among sales people at major publications like this woman.

Check out our package of 10 articles on mistakes to avoid in PR, bizdev and sales.