How to choose a spokesperson 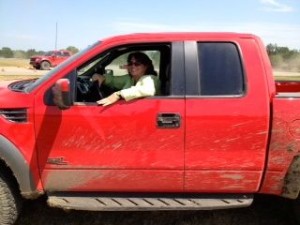 Me, in the bad-ass Ford Raptor at the off-road section of the Ford Worldwide Proving Ground in Dearborn, Mich.

I spent the first part of this week at Ford Motor Company in Dearborn with 256 other representatives of the press and blogosphere. We heard remarks from people at all levels of the company, from Bill Ford and Allan Mulally down to the scientists figuring out how to use more natural stuff in seats and the dude who makes those cool life-size clay models of cars.

As you might expect for a press event, every person we encountered was enthusiastic about their work and their employer. Ford and Mullaly weren't scripted or stiff -- they spoke off the cuff and naturally. Ford even admitted that he almost quit the family business because it wasn't interested in a green agenda, and Mullaly talking about giving up his dream of making one more airliner at Boeing to help turn Ford around. That's not the news -- we expect Fortune 500 leaders to be good speakers and on point.

What was most compelling to me -- and to others I spoke with who also go to enough events to feel a little jaded and cynical -- was the way the rank and file told their stories. Each of them spoke to a particular Ford message from their own point of views and in their own words. They brought their own voice, values and enthusiasm to the values and mission of the company.

As a result, they reinforced the Ford messaging without coming off as programmed automatons shilling for their bosses. Au contraire. They came off as authentic representatives who genuinely are proud to be a part of the new Ford and the work they and the company is doing. There wasn't a whiff of pandering or rehearsal. [Here are some tips for integrating messaging organically into media interviews]

Sure, Ford chose these people for a reason. But that reason wasn't blind adherence to our corporate messaging document and a willingness to do what they're told. No. They chose these particular people -- and there were probably a 100 or so over the course of three days -- because they embody what the company's about. Because they believe, not because they drank the Kool-Aid®.

When you're choosing spokespeople, choose as Ford does. Use your key message architecture should help you pick the right spokespeople. [Click here to learn how to make a messaging document] Of course you want your reps to know the messaging. But more importantly, you want them to be people who live it. If they're not natural speakers, give them some training to build their confidence and enhance their technique.

Let your spokepeople tell their own stories and they will do a better job of telling yours. 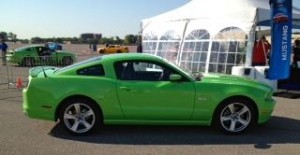 This is the boss 2012 Mustang V8 in Word Factory green. Should this be our next company car?