I love Quartz, the online business magazine. Its daily digest is a must-read for me and a terrific way to keep up on global news. I highly recommend it. This weekend's update is one of the best. It features a recap of euro zone issues--admittedly, a somewhat obscure and maybe even hard-to-fathom topic for many of us. But writer Jason Karaian lured me in with a great metaphor that he works skillfully to the end. The post provides a terrific example of making a potentially boring-but-important topic engaging for readers. Check it out:

The euro zone, it’s fair to say, is hardly a happy family. And looming largest are the antics of a single problem child.

Greece has been a euro member for 15 years. As every parent knows, that’s around the time when things get difficult. The innocence of early youth, so full of promise and potential, gives way to sneering and sulking. Rebellious tendencies. Mood swings. Running with the wrong crowd. Wearing inappropriate clothing. Giving people the middle finger.

Greece has blown through its allowance, and then some. In search of more money, it is raising a stink, playing one relative off against the other. But after some bickering amongst themselves, the elders are now more or less united: The kid needs to learn to behave before they dip back into their wallets.

“I literally can’t even,” Greece says, slamming the bedroom door in a huff. “You brought me up this way, man. I’ve already suffered enough. What are you going to do about it? Throw me out?” And this week, for the first time, its European creditors said, “Yeah—we might.”

But therein lies Europe’s dilemma. If it doesn’t get tough on the wayward child, it might set a bad example for others with troublemaking tendencies. But what sort of message would it send to kick Greece out of the house—er, monetary union—altogether? Tough love is one thing, but this is heartless. Cowed and afraid, the bond between family members might never be the same. Some of them might storm off too. And what will the neighbors think?

For all the drama, most still expect the family to patch up its differences and make a deal. But maybe, as in so many households, they just need to grit their teeth and wait for the teenager to grow up.—Jason Karaian

Want more? Karaian also wrote this great piece in the style of Ode on a Grecian Urn.

Here's a Grecian urn we have here at The Word Factory: 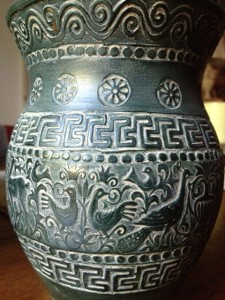