In this guest post, Steve Peha, my co-author on Be a Better Writer, takes a swing at what made the New York Times' attorney's response to Donald Trump's libel claim go viral. He uses aspects of the Six Traits of Writing, a methodology created by the Northwest Writing Lab that we use here at The Word Factory to perform qualitative analyses on every kind of written content.

Here's some darned good writing and a display of civil discourse that I have sorely missed during this unusual an unsettling political season.

No matter where one stands on this matter, we can all stand together is support of pointed prose in service of the law and the essential freedoms enumerated in the First Amendment.

If you decide not to read this letter, keep one thing in mind: this issue doesn't end on November 8th; it begins on November 9th. On that day, and for all of our days forward, my hope is that we will all aspire to the clarity of communication and civility of discourse that David McCraw exhibits here. 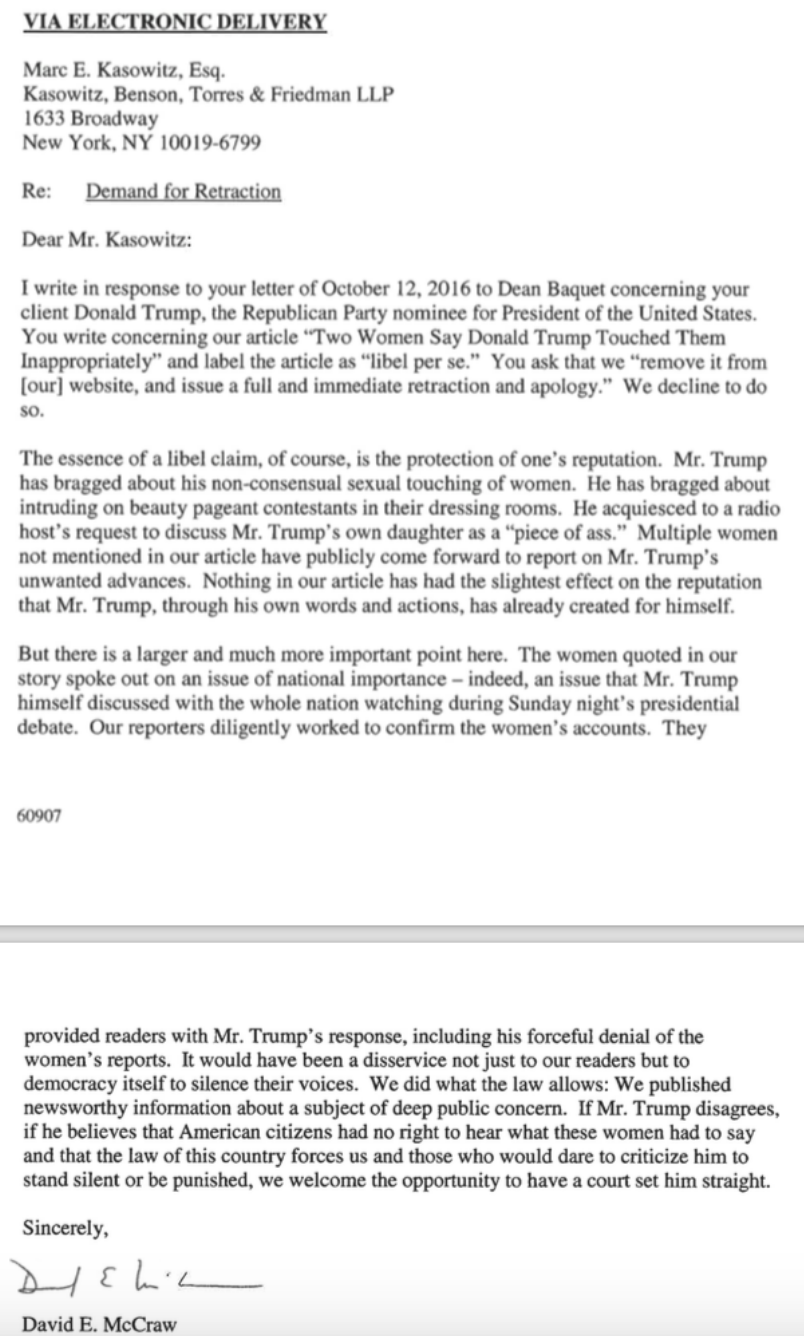 I did a little analysis to figure out why David McCraw's letter is so effective.

Organization: Both the first and second paragraphs are concluding sentence paragraphs, not topic sentence paragraphs. The first paragraph is just a statement of dry facts—until the last line. Notice, too, that this last sentence is much shorter than those that precede it. This gives us a feeling of finality. The letter could, in fact, have stopped right there.

Word Choice &  Sentence Structure: In the first line of the second paragraph, the writer drops the phrase "of course". We often use "of course" to say "of course you know as well as I do". But it's never necessary. And we often use it ironically, as the writer does here, to emphasize the opposite, in this case, that Mr. Trump's lawyer does not know what libel is.

Ideas & Details: From a legal and formal standpoint, the second paragraph isn't needed except to express the clarity of the NYT's argument and the stance it would take in defending any legal action in court. But there's more here than just lawyering. There's history and democracy and the public interest and, of course, the definition of libel—which clearly will be a good thing for all of us to understand in the coming weeks, months, and even years. If you read only the second paragraph of this letter, you know what libel is and what it means to libel someone or to be libeled by someone. I didn't know exactly what libel was until I read it. Now I do. The last line of the second paragraph is indisputable because it's an assertion that can't be proven or disproven. Who knows how the Times article affected Mr. Trump's reputation within only a day or so of its publication? It may have affected him in the polls but no one can say if it affected his reputation. Here again, as a concluding sentence, and the main idea of the paragraph, it drops down like a sledge hammer. The entire third paragraph broadens the NYT lawyer's argument to include another "lesson", this time on the First Amendment and the role of the press.

Voice: Much of this letter's effectiveness comes from two things: paragraph structure and the careful inclusion of information that, while not strictly necessary, signals to the other side a sense of calm confidence in the strength of its case even as the tone of the entire letter remains calm throughout. That's the trick. Let the argument itself raise the stakes.