Oh, the places I went

by Margot Carmichael Lester | May 19, 2011 | Training & Workshops, Writing/How to Write 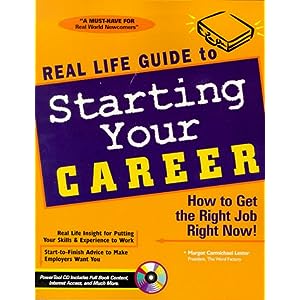 The book that started *my* career in writing about jobs.

Back in 1998 when Joel Bush asked me to write a book about starting your career, I thought it would be a fun project. The whole idea seemed a little nuts since I really wasn't any kind of expert on job-seeking. But I'd advised a bunch of college interns on landing their first gigs, and I was a good reporter with a fantastic Rolodex. Why not take a chance? Maybe I'd make some money, but mostly I figured the effort would shut up all the people who said, "You oughta write a book".

The resulting tome, The Real Life Guide to Starting Your Career, yielded all that, and a bunch more:

The most recent benefit has been a series of career writing workshops that I've been giving with Steve all over the country. It started in Detroit a couple years ago as part of a Kauffman Foundation project and has grown since then. Our next workshop -- open to the public -- will be held on 18 June in Seattle. It's a full-day affair covering everything from story-telling (your own career narrative) and cover letters to resumes and tweets and everything in between. Learn more here.

So the next time somebody asks you to do something a little kooky but a lot of fun, give serious consideration to saying yes. You never know where it will take you!