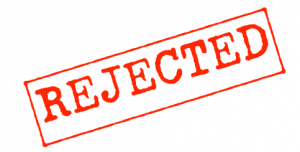 We've all gotten those form rejection letters from schools or programs or companies. Even if you think someone really tried to write them with the recipient in mind, the fact is they all come up woefully short. And those of us on the receiving end can't quite help feeling like losers when we get them, even if only for a minute or two.

That's why this rejection letter from author, thought-leader, dare I say guru, Seth Godin, is so dang fantastic. (Mr. Godin is offering a 5-day MBA class for social entrepreneurs.) Here's why I think this is the model for rejection 2.0 (using the Six Traits):

IDEAS: Instead of feeling like a loser, the reader feels like a near-winner. Like one of the chosen even though not chosen. Notice how he doesn't overdo the intro, so you feel like he's being over-the-top with praise just before he dumps your ass. He's honest about the challenges of making the decisions, but doesn't suck up. I also dig that he tells you not to call, and why.

ORGANIZATION: I love how it starts on a positive and eases you into the negative. By giving us a little set up, Mr. Godin gives us a soft place to land. I also love how he builds on the short sentences of the first two grafs into the meaty "business" section and then lilts on out of there to the conclusion on a wave of shorter grafs.

VOICE: First of all, it feels authentic. It's written in a voice that "sounds" like everything else I've seen or heard from Mr. Godin. So even if he didn't write it, we kind of think he did. Because of this, even though we know it's a form letter, it feels decidedly less impersonal, which eases the sting of not getting in. And the fact the he admits "mistakes were made" only makes it more appealing. And the "I can't wait till that happens" is both a challenge and a laugh line.

WORD CHOICE: Instead of the usual litany of adverbs and apologies, Mr. Godin uses plain, straight-forward language to deliver the bad news. Since it's not over-wrought, it feels true. You get the impression he and his team really did struggle with the decision.

SENTENCE FLUENCY: The varied sentence patterns and lengths make this feel professional but conversational. The informality adds to the feeling that this is meant for you, not a bunch of yous.

CONVENTIONS: Few people can get away with one set of ellipses, let alone two. But Mr. Godin deploys this convention to good effect in the letter. If you're a grammarian, you could make the case that he's used them incorrectly. But a more contemporary function is to indicate a pause, or an unfinished sentence trailing off into the ether. Mr. Godin uses them in the latter situation, and it works like a charm.

I'd expect nothing short of Mr. Godin, who writes for a living, after all. But even those of us who haven't penned 13 books can learn a lot from this model. Next time you have to write a rejection letter, whip this one out, with the analysis above and see if you can't do a better job of delivering bad news.

Interested in learning more about how to analyze great writing and apply the findings to
your own? Contact me about some training We offer individual/small group coaching sessions and full-on workshops that will help you assess, articulate and emulate effective writing.