My latest for Match.com on Yahoo! is a scientific look at flirting.

The science of flirting 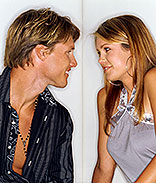 We know flirting can lead to all kinds of things, but most of us don’t know how it works. So I asked some brain experts what the heck’s going on — here’s what they had to say.

“Our brains respond in a very complex way to both pleasant and unpleasant [flirting] experiences by ‘firing’ and ‘releasing’ neurotransmitters and then deciding how to react,” says Shadi Farhangrazi, biochemist, neuroscientist and founder of Biotrends International™ in Denver, CO. According to Dr. Farhangrazi, PET scans of the brain show “activity in the amygdala (which is responsible for regulating emotions), nucleus accumbens (which controls the release of dopamine), the ventral tegmental area (which actually releases that dopamine) as well as the cerebellum, which controls muscle reaction — and, as a result, the response to fear, unpleasantness or happiness. In addition, the hippocampus, prefrontal cortex, and pituitary gland (which releases beta-endorphins) and the insula — which is a small region of cortex beneath the temporal lobes — also appear to show activity.”

In other words, when it comes to matters of the heart, it’s all in your head. [Click here to keep reading about how flirting works]